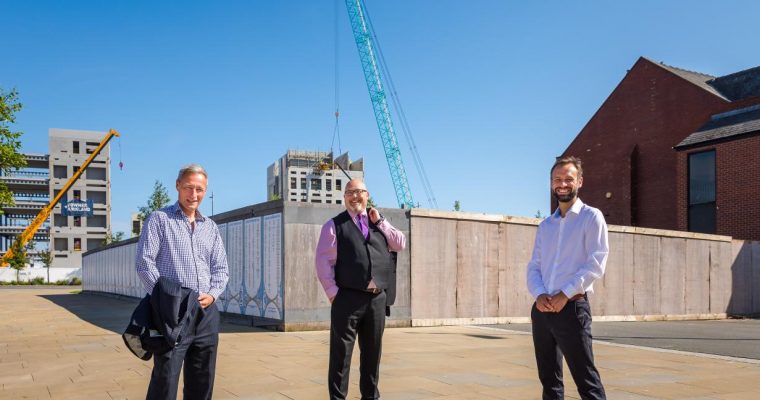 Work on a new hotel that will stand in the centre of Sunderland is set to get underway.

The 120-bed Holiday Inn Hotel, that will overlook the city centre’s Keel Square, will begin to rise from the ground over the summer, after the council agreed the sale of the land with developer Cairn Group.

The company behind the proposals for the Holiday Inn hotel saw its plans approved in the latter part of last year. Final agreements were signed with the council this week, which means that work can now commence on the four-storey development.

The hotel is the latest in a string of positive announcements made by the council, including a £100m deal with Legal & General, that will see three buildings – including City Hall, which is progressing well – spring up in the Riverside Sunderland district, a new urban quarter that will comprise offices, homes and leisure spaces.

Cairn Group’s £18m Holiday Inn development is being part-funded by Canada Life, a commitment secured by Avison Young, and will create additional accommodation that will support an increasing number of visitors to the city.

With business spaces set to appear on the former Vaux Brewery site, as well as the conversion of the former Gilbridge police station into high-specification commercial premises, and the addition of the Auditorium in the Cultural Quarter, it is expected that the position of the hotel will appeal to a range of leisure and business travellers.

Cairn Group’s Richard Warren said: “We’re delighted to be able to push forward with the development of an exciting new addition to the city’s leisure and hospitality portfolio. We are thrilled to be part of regenerating Sunderland and remain committed to investing within the region.”

Aneil Handa, who has also worked to agree the deal on behalf of Cairn Group: “This high quality hotel will appeal to a range of travellers, and as one of a number of exciting developments progressing in Sunderland, it is clear that this hotel is coming at the right time for the city.”

Building work will get underway over the summer, and it is expected that the hotel will complete by the end of 2021.

The hotel will comprise ground-floor commercial units with opportunities for food and beverage outlets, that will add to the city’s daytime and evening economy.

The group is open to providing letting opportunities to both national operators as well as local businesses, and with two of the four spaces set to be let by Sunderland City Council, people who may be interested in taking space are being invited to get in touch.

The keenly-awaited addition to the city centre will create 130 jobs when it opens its doors next year.

Councillor Graeme Miller, leader of Sunderland City Council, said the deal was another important step forward in the transformation of the city centre.
He said: “This has been a challenging time for the city, as it has for the UK at large, so it is good to be able to announce a really positive development for Sunderland, and one that demonstrates that we are ready to emerge from this crisis on the front foot and deliver the dynamic city centre our residents want and deserve.

“We had the wind in our sails before COVID-19 struck, and I am determined that we do not lose any momentum, as we push ahead with the transformation of our city centre and the wider city. We’re delighted to have signed this deal and look forward to seeing the hotel take shape.

“Community wealth building projects – deals we facilitate that support the jobs of local people both during the construction phase and thereafter, are at the heart of our vision for transforming Sunderland.

We’re looking forward to seeing the positive impact of this scheme for local people.”

He added: “Hotel developments represent much more than just the financial investment being made – they’re a vote of confidence in the city’s visitor economy – and we’re pleased that Cairn Group can see the vibrancy that is growing in Sunderland.”

Avison Young, acting on behalf of Cairn Group, secured forward commitment funding from Canada Life for the development of the new retail and hotel development at Keel Square, Sunderland.

Simon Beanland, principal and head of investment at Avison Young, Newcastle, said: “This funding commitment by Canada life is another tremendous vote of confidence for the City of Sunderland, following hard on the heels of substantial funding commitments by Legal & General elsewhere in the city.”

The development of the hotel is one of a number of significant projects underway in Sunderland city centre. It follows the completion of The Beam, which is now home to online grocer Ocado, as well as two other growing businesses. And City Hall – which is now well underway – will be followed by two more offices on the Riverside Sunderland site.

Elsewhere in the city centre, a 450-seater auditorium is taking shape; plans are afoot to transform the former Gilbridge Police Station; and old buildings including the Elephant Tearooms, Mackie’s Corner and the River Wear Commissioner’s Building are set to get a new lease of life. The seaside is also seeing waves of investment, with a new inn with rooms and the STACK Seaburn, a family-focused leisure venue, also progressing.

Businesses keen to register an interest in the commercial spaces on the ground floor of the hotel – which will be best suited to food and drink operators – should contact Amanda Burbridge at Sunderland City Council at Amanda.burbridge@sunderland.gov.uk or by calling 07880 465 910.

What’s happening in and around The Beam click here